John Kulick has developed a theory which he calls the Snowflake Universe.  The gist of the theory is that space itself is quantized.  For the universe to increase in size, it must therefore be gaining new quanta of space.  If the observable universe is itself moving relative to some larger background, then the addition of new quanta and subsequent expansion of space must force each quanta of space to follow a curved path through the larger background, imparting a centripetal acceleration on every quanta of space in the universe.  He suggests dark matter is not necessary to explain the motion of stars in the outer rim of a galaxy, and that this centripetal acceleration completely accounts for what we have been interpreting as dark matter.  Kulick also distinguishes between two types of Time: one which is experienced in the universe, and a different Time which Kulick calls Absolute Time, time as measured in the background external to the universe.

I regarded the idea as interesting and read through his PDF.  As I looked through his equations, one popped out:

In this formula, k is a constant which appears throughout Kulick's other formulae, c is the speed of light, and T0 is the age of the universe.

Taking the cube of both sides gives

Readers of Louise Riofrio's blog will recognize the form of that last formula.  Riofrio got there following a different path.  Taking the Planck equations

and rearranging them so that the h_bar term drops out, then substituting the mass and age of the universe gives

Now, Kulick's T0 and Riofrios t are the exact same quantity: the age of the universe.  Therefore

Upon realizing that they were reaching the same destination from different paths, I introduced Kulick's work to Riofrio in a comment on her blog last September.

So what would be the behavior of the universe if space was in fact quantized?  How would it differ from a universe in which the three dimensions of space were a continuum?

Let's suppose that the properties of a quantum of space are intimately tied to the Planck formulae, that in fact the formulae have meaning precisely because they are properties of these smallest units of space.

note: the following section has been edited to correct a glaring error in my math.  Nice to get that out of the way right off the bat, no?

{note the use of h, the Planck constant, rather than h_bar, which is h/(2pi)}

This would imply that there is no such thing as a Singularity, no point of infinite density at the center of a black hole.  It can't get any smaller than the quantum of space.  If it got any smaller, it would be like a photon moving in a circle with the leading edge of the wave overtaking the trailing edge.

If quanta of space obey a sort of exclusionary principle, such that no two quanta could occupy the same volume of space at the same time, then the structure of space is a vast number of quanta packed together, each quantum having at most twelve neighbors (if and only if they are packed as tightly as possible).  For something to be in this universe, it would have to be contained within these quanta.

Thus, the mass of a black hole would be contained in many quanta of space packed tightly together, each filled to the brim with the maximum amount of energy possible.  A black hole with a mass of five solar masses (~10^31 kg), rather than being packed into a point of infinite density, would instead be contained in on the order of 10^39 quanta of space, in a total volume of about 10^-65 m^3.  It is very small, but it isn't a point, and the density is not infinite.

If the black hole was the mass of the entire universe (derived above as ~10^53 kg), all packed into quanta of space to maximum energy density, then rather than being a point of infinite density it would be a cluster of quanta measuring about 10^-20 meters across, one one hundred millionth of a nanometer.

However, since we can never measure a distance smaller than one Planck length, and that is the diameter of a quantum of space, such distinctions as center and surface become impossible for us to distinguish. Therefore, a second way of looking at a Planck time is better: at the speed of light in a vacuum it would take one Planck time for a signal such as energy to travel from the center of a quantum of space to the center of any of its neighbors; it takes one Planck time for a signal to move from one quanta of space to the next.

To be continued in part 2
Posted by Ed at 3/19/2015 04:17:00 AM 1 comment:
Email ThisBlogThis!Share to TwitterShare to FacebookShare to Pinterest

Canada is a peace-loving nation. We welcome people from all over the world, of all different faiths.

We also, throughout our history, have punched well above our weight on the world stage militarily. In the first world war, Canada had a military of a million people, out of a total population of 11 million. Canada has fought in both world wars, the Korean war, numerous peacekeeping operations, the 1991 Iraq war, Afghanistan, we have planes fighting ISIS today.

We have been a staunch ally of Britain and the United States (when we weren't burning down the White House, like in 1812). Since World War Two, the USSR was defeated without a nuclear exchange by the efforts of the United States with its allies Canada, Great Britain, Australia, France, Germany, Japan, Poland, and Israel.

But that alliance is breaking down. For six years, the Obama administration has confused friends for enemies and enemies for friends. Obama is basically giving Iran the bomb. He sat back and watched, time and again: as his own ambassador was slaughtered in Libya, as Russia invaded Crimea. Even as US special forces had finally tracked down Osama bin Laden, he dithered for months before giving the go-ahead, and then sat back and watched.

Canada's two closest neighbors are America and, across the oil fields of the Arctic ocean, Russia. Would Obama sit back and watch if Russia took a few Canadian islands? Putin is doing the calculations.

Canada is capable of producing nuclear weapons right now. We're a Uranium-exporting nation. We also export nuclear reactors, which means we already have most of the equipment necessary to make nuclear weapons. We also have long range heavy lift aircraft and can launch rockets of our own. We could have a test weapon built in a matter of months. And we could have a deterrent arsenal within a year. And then Canada wouldn't have to depend on a fickle US president.
Posted by Ed at 3/04/2015 02:12:00 PM No comments:
Email ThisBlogThis!Share to TwitterShare to FacebookShare to Pinterest

In light of the recent massacre at Charlie Hebdo magazine, I am republishing the Jyllands-Posten Mohammed cartoons. Apparently one of the twelve - the one most often shown, with Mohammed's turban really a bomb with a lit fuse - has violated Photobucket's terms of use. The other 11 are still present on my Photobucket account. More than 100 people were murdered in rioting over these cartoons, which makes them newsworthy and in the wake of Charlie Hebdo, politically relevant. Shame on Photobucket for removing the most recognizable of the cartoons (and thanks to Instapundit for keeping a copy online).

Don't like it? Offended? Then write a comment. Or Tweet something. Or write a letter to the editor of your local newspaper. Make a speech. Or call me an asshole to my face. That is all free speech, and that's how we do it in civilized society.

But fair warning: Wanna get violent? Wanna get medieval? Bring it, because I am not Charlie Hebdo - if you come after me with violence, I turn into the Angel of Death. 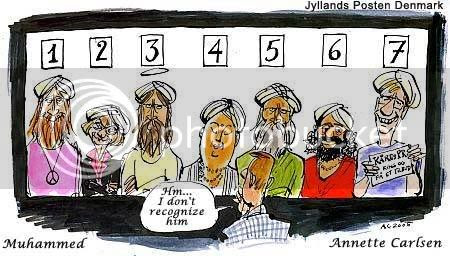 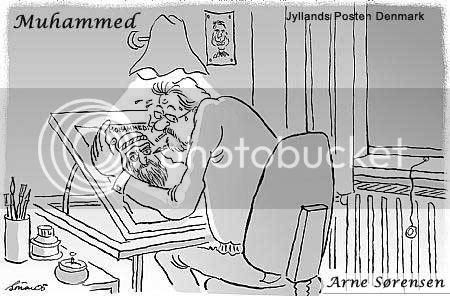 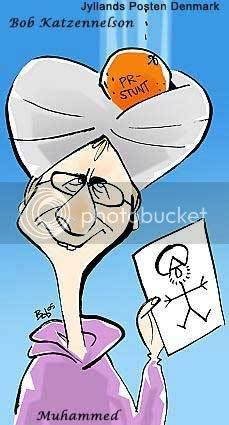 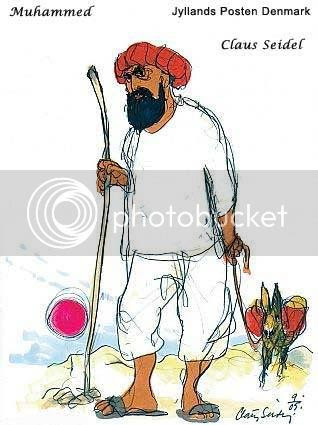 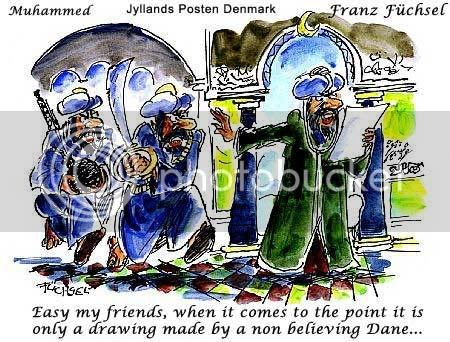 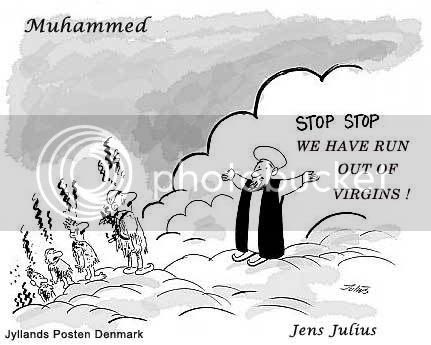 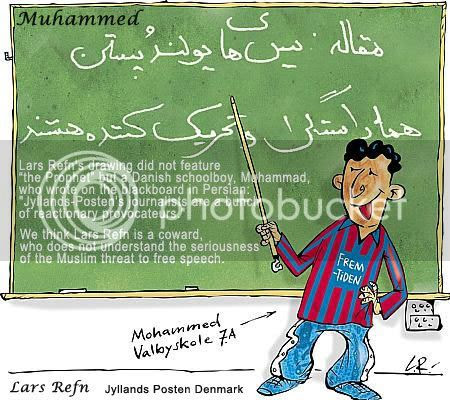 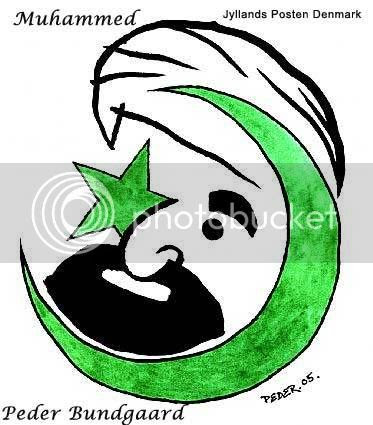 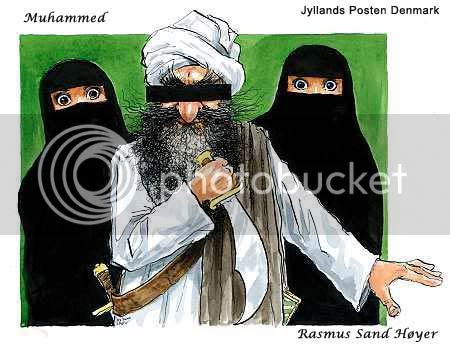 Posted by Ed at 1/12/2015 11:14:00 PM No comments:
Email ThisBlogThis!Share to TwitterShare to FacebookShare to Pinterest

An idea, free for the taking

I come up with ideas for inventions all the time.  However, there are only so many hours in a day,  and I simply can't work on all of my inventions.  Sometimes I'll start on something, get sidetracked by five or six other projects, and then ten, fifteen years down the road someone else has turned it into a commercial product.  Good for them.

I came up with an idea for a product over the holidays, and I just don't have the time to work on it (I have four other projects on the go).  This is an idea that will make someone a millionaire, and I don't have the time, so I'm just giving it away.

I live in Canada, and if you live here or in Russia or any other country that experiences really hard winters you have seen this problem: as people drive, their tires fling snow up into the wheel wells.  The tires are warmer than the snow, and the snow melts a little before hitting the wheel wells and re-freezing.  Ice then builds up in the wheel wells, particularly behind each wheel. It will build up there until the ice is touching the wheel, at which point the wheel polishes the ice.  Eventually a car will be carrying hundreds of pounds of ice in the wheel wells.  This can be really dangerous, particularly if it breaks off under its own weight while you're driving down the highway, or if it begins to interfere with the steering.

For most people in winter nations, this minor annoyance is dealt with by kicking each wheel well as one is going around the car scraping ice off the windows, and periodically kicking at the ice buildup.  Or, not bothering and just carrying around hundreds of pounds of ice (full of road salt, which does lovely things to a paint job) and taking the hit to gas mileage.

But there is a better way.  Cars sold in winter nations come equipped with rear window defrost, an electrical circuit that includes wires embedded inside the rear window.  These wires heat up when current passes through them, much like the Ni-Chrome wires in a toaster. A similar system is in place in ICBMs and spacecraft to keep electronics at a good operating temperature. Specifically, Pershing missiles contained a type of fabric that had Ni-Chrome wires embedded in the weave, and the fabric was wrapped around various components.  Then a little current went through the wires and the rest of the fabric acted as a buffer to spread the heat evenly.

This same kind of fabric, or a modern equivalent, can be placed on the top/back of each wheel well in a car, inside the engine compartment and inside the trunk.  The wiring for each of these heaters can be tied in parallel to the wiring for the rear window defrost circuit.  Then when the driver turns on the rear window defrost, the missile heaters on the wheel wells will melt the ice clinging to the surface, causing any accumulated ice to fall off the wheel well, and preventing buildup long before it becomes dangerous.

As I said, I don't have the time to work on this.  If someone else wants to do it and sell it to car companies and aftermarket suppliers, go hard.
Posted by Ed at 1/05/2015 03:38:00 PM No comments:
Email ThisBlogThis!Share to TwitterShare to FacebookShare to Pinterest
Newer Posts Older Posts Home
Subscribe to: Posts (Atom)